One hundred years ago, I pledged, on this blog, to build a couple of unique models. Ones that would combine a character from a film, with a vehicle from a comic, and infuse them both with a hint of WH40K flavour.

But only a mere few days into the project, I got to a stage that had me stumped. I put the fledgling models to one side, promising myself that I'd return to them soon, once I'd mulled over how to go about finishing them.

Fast forward those hundred years, and I was finally struck by the urge to complete them. In reality I was less driven by the desire to finish them that I was by the guilt of having abandoned them.

And today I think I'm finally at a place where I can share them. 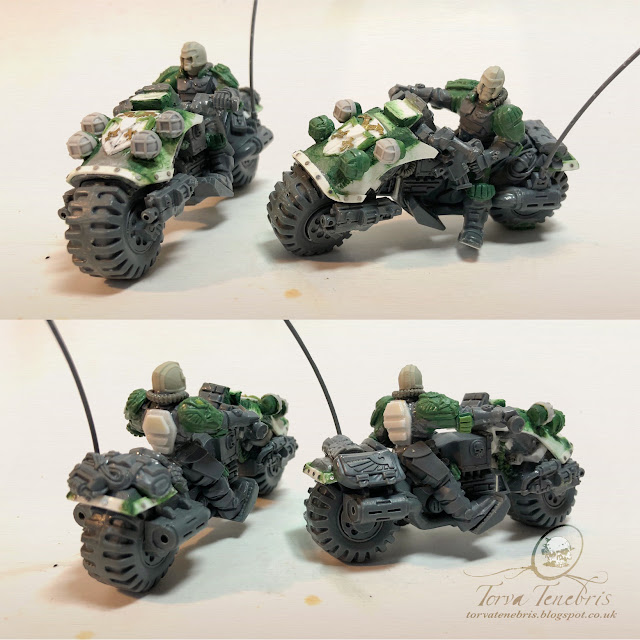 Although they don't look all that complicated, these bikes were a real headache to construct. I worked on them, on and off, for about two and half years, doing tiny, incremental stages every few weeks, then abandoning them for months on end. But I took a few photos along the way, so I can share some of the major leaps forward.

Before I do that, I'll just share a quick reminder of my original brief. You can see it in full here, but quite simply it was as follows.

This meant I was starting with two of the Space Marine Scout Bikes, which I cut at the join between the front forks and the main body of the bike.


I bought the lights from Zinge Industries, who have an incredible range of tiny detailed parts for exactly this kind of conversion work (I think it was these ones). However, even though they seem to come in sets of five, and from looking at the photo below I clearly had at least six, I somehow didn't end up with enough to complete the job. So rather than risk interrupting my flow while I waited for a new order to arrive, I decided to cast the missing two with Instant Mold and green stuff. (I talked a bit more about that process when I created the Judges' shoulderpads here.)


These two bikes finally complete the construction of my entire Judicial Enforcer Squad, a process I started back in the first post of this blog, nearly four years ago. That's slow, but its not my slowest project ever. Not by a long shot**.

Besides, the real challenge is to see if I can get them painted a little bit quicker. So here's to hoping I can finish them before April 2023.

*For more information see over 40 years of Judge Dredd comics.
**Remind me to tell you about my converted Scout Titan at some point.
Posted by Tod Tenebris