Ugly, brutal and mean, my Ork meganob squad is comprised of a handful of the old metal figures from circa 2000, alongside the then-Ghazghkull-Thraka-model. They were most likely designed by Brian Nelson as part of his original revamp of the Ork range. At the time, I vaguely remember thinking these juggernorks were some of the chunkiest metal infantry miniatures I had ever handled. In fact, seeing as their slightly larger, contemporary replacements are now cast in plastic, they still might be. 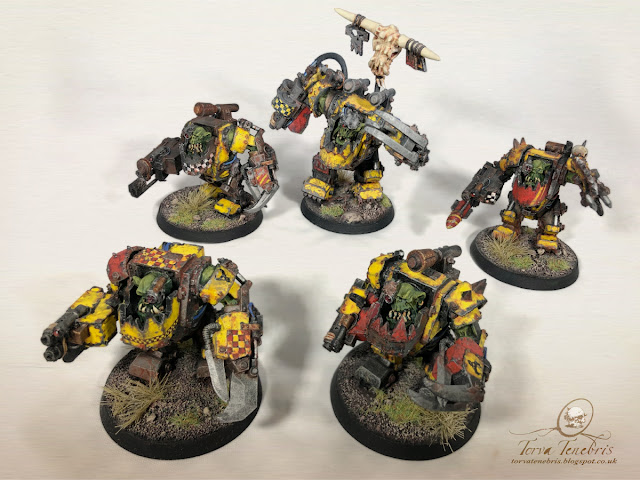 As per usual I did a bit of choppin' and changin' to make the models more my own. But because the base models were already so damn good, I kept my tinkering to a bare minimum, mainly just opening up a little extra diversity in the weapons or pose. 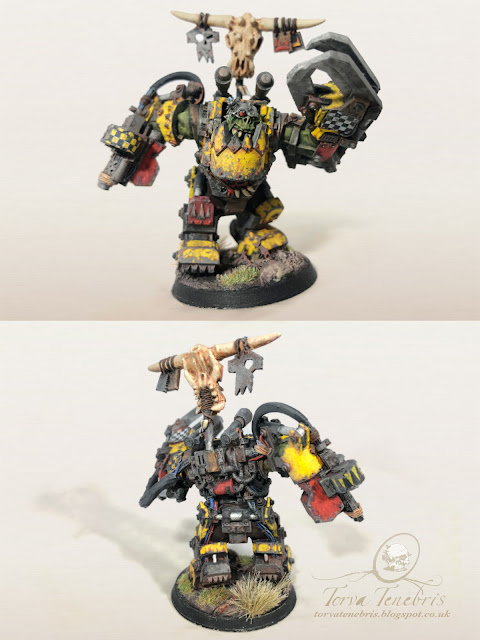 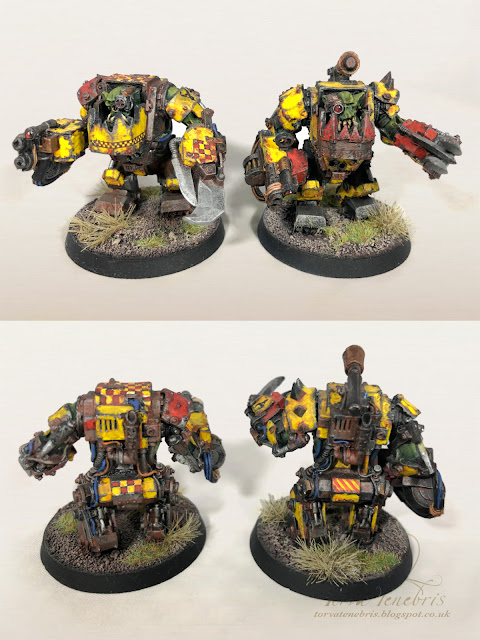 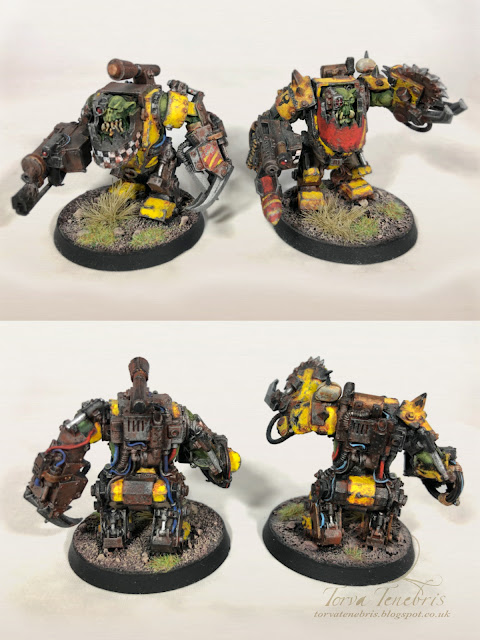 Regular readers* will notice I switched my predominantly red colour scheme to yellow, as I thought the brighter colour might hint at the idea of Ork nobility, and perhaps give the wider army a bit more visual interest. I also decided that, what with the Ghazghkull miniature having that giant bovine skull on its back, I'd use a bull's head icon as their unit badge. Like by using a bullseye theme it references Ork sharpshooter* abilities and points to the fact that these guys are seriously elite (rather than signifying Goff klan allegiance, as it usually does with Orks). It's tricky to see in these pictures, but each of the four regular nobs has a water-slide transfer of a horned, black, bull skull stuck on a random armour plate somewhere.
The idea of different units having their own personal markings is quite appealing. Something that sets them apart from the rest of the army, but ties them together with each other. Especially if it isn't immediately noticeable – like it's buried another layer down from all the most obvious stuff. Hidden, so that it requires more than a furtive glance to find it. A puzzle that's its own reward.
Subtly recurring markings appear in a few other places within my Ork armoured brigade. I guess I find it interesting thinking up some strange internal logic as to how these mean green fighting machines might think. I've got a few other units nearing completion, so I'll probably share some more ramblings on the matter in future posts.

*Hahaha, who am I kidding? There's no such thing
Posted by Tod Tenebris